Did you ever look at a close relative and ask yourself that hideous question “Am I like that?” No other question is so hard to answer, I think.

My mother was born 100 years ago today, and was a child of her time, as are we all. That time was one of clear-cut roles and expectations for women, and it crumbled around her during her life. She was, I think, stymied by the changes but willing to challenge her own perceptions. In a grudging sort of way. She stubbornly argued she was NOT stubborn. She was finicky and explosive and opinionated. She believed that anything worth doing was worth doing her way.

She ironed everything but rugs. And I’m not sure about the rugs. She believed in propriety and process, hard work and common sense. She inevitably bungled a punch line. She endured her own mother, although at great cost, believing it to be the moral way. Immersed in an immigrant Catholicism, she preferred Protestant humanness to Catholic etherealness. She wanted to sing “He walks with me,” not “Panis Angelicus.”

If I could fit her into a blog post, she wouldn’t be my mother.

So I salute my mom today and ask the answerless question: Am I like that? 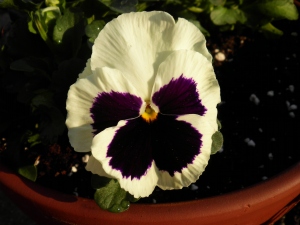