There are two kinds of people

which one are you?

do you reach for a rake

or reach for a shoe?

the one must be tidy

the other dons kicking shoes

and goes out to play.

Thanks more to the S.W. Berg Photo Archives.

When you’ve decked your deck with autumn hues

of scarlet, gold and light chartreuse

you don’t expect what can appear

when summer leaves a souvenir.

Nobody planted it but itself

no phantom gnome or garden elf

it had to see, after hearing the tout,

what Thanksgiving and Christmas were all about.

Thanks again to the S.W. Berg Photo Archives

and D.J. Berg’s green (and yellow and red) thumb. 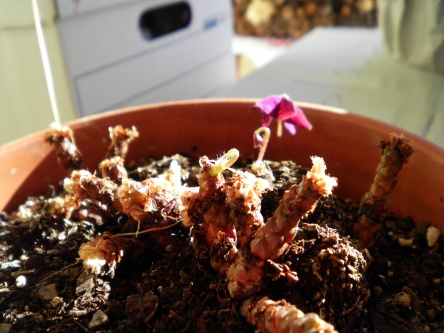 chaos before, behind it

a new leaf is where you find it.

With apologies to Laura Ingalls Wilder, I have dubbed my new home The Little House on the Retention Pond. This is the view from my back door. The previous owner graciously left her swing.

I use the word “home” guardedly. It isn’t home yet. But I am doing the first thing to make it a home: bubbling celery and onion in butter, and simmering giblets. Ah, stuffing.

When I first visited this place and saw the retention pond, my immediate thought was ICK. My second thought was MOSQUITOES! Third, maybe I should see the inside.

I don’t know yet if my family will be here for Thanksgiving. What I do know is that I will have turkey and stuffing. And, if I can find the can opener (so far, no luck), I will have canned cranberry sauce. If my family comes, they will bring assorted side dishes which will be served atop festive packing boxes, artfully arranged. The shining water outside will be nicely echoed by the shining plastic drop cloths inside, the ultimate in gracious slip-and-trip living.

Meanwhile, I intend that reflecting is something we will do together, the pond and I.

Happy Thanksgiving, dear reader, from The Little House on The Retention Pond! 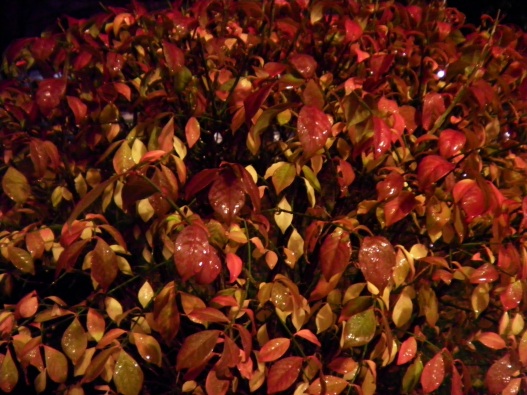 each the size of one cricket note

but together rising, falling

neither fall nor winter

to hold the year

Dear reader, ever since I started using this new computer, I’ve noticed that the photos in my blogs come and go. Sometimes they’re there, and sometimes they’re not. Please bear with me. I have no idea why the photos sometimes don’t appear. This one is supposed to have a photo in it, but it doesn’t at the moment. Perhaps sometime before the end of time I will figure out what’s going on. Or isn’t going on, as the case may be.

Yes, dear reader, roses greeted me at my new front door. In November! In Indiana! 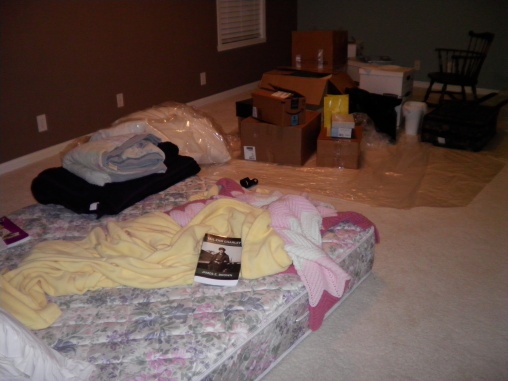 My bedroom. Eat your heart out, Martha Stewart.

And do I hear “been there, done that,” dear reader?

What I want to reflect on, though, isn’t the chaos. It’s the book on the bed. Throughout all this mayhem, I’ve spent a few minutes every night with this book. Fittingly, I finished it on Veterans’ Day.

The book is “Tail-End Charley,” by James E. Brown, who kept a journal during his time as an Army Air Corps pilot. A kid who grew up quickly in the skies over World War II. To me it was fascinating, not just for the story in it but for the story about it.

Jim Brown wrote a book based on his journal, but it wasn’t published. Fast forward to 2017. His son, Gary, a writer also, took that manuscript and made it happen. He and his wife, my writing mate Tamara, and their daughter, a graphic artist, did it. They self-published and this handsome paperback is the result.

I never met Jim Brown, but, boy, do I feel as though I know him! Underneath his descriptions of planes and places flows his understated narrative about himself, subtle and steady. In my opinion, his understatement is consistent with his generation and when he allows us a glimpse into his own feelings its rarity makes for eloquence.

I recommend this book, not because I know and like Jim’s family (I do), and not because I love reading about war (I don’t), but because of the down-home skinny kid who reveals himself in it.

In a stupor, I am here, dear reader. Having spent the last three weeks with my wonderful son and daughter-in-law, two grandkids, two dogs, and two cats, I have arrived in my new house. I have lived here for four whole days.

Aside from a mattress on the floor, a desk, and some miscellaneous chairs, my furniture at the moment is boxes, not a one of which is shin-friendly.

I’m downsizing, which is another way of saying I’m exploring the depths of wishy-washy. My decision-making is not crisp. Maybe there are just too many decisions. I contemplate something and what it will look like in some landfill years hence and still I can’t quite make up my mind about it.

Nonetheless, the pile of flattened boxes grows and gives me hope.

The feels-like temp this morning is 19. My winter clothes are in storage, keeping some boxes toasty warm. They are probably close to the box with my pots and pans, which got buried in the middle instead of the front of the storage unit. Golly gee, I have to get carry-out.

I was mercilessly berated by my family on the matter of my eight-year-old computer. So I got a new one. My poor addled brain is therefore trying to deal with the physical chaos of my surroundings and the virtual chaos of a new computer. Touch-screen? Wireless? All new, all befuddling, all out to get me. I have no idea yet how to manage photos.

Please bear with me. I am on a perilously steep learning curve, and don’t dare look down.

there need be no defense

More thanks to the S.W. Berg Photo Archives.