It rained a mirror

and a firmament shone underfoot,

looking up at itself,

of the night rain,

on the morning glass.

I maintain it cannot be

this baby girl hovers over me?

but the photographer shoots

kin to the moon

at the pondside diner.

The chase and the catch, continued from yesterday.

You see “In search of story” at the top of my blog.  For me, trying to write a story is like trying to enjoy a root canal. But I listen to others in an effort to learn about story. And this is what bothers me about the machines: they yield the tidy catch, thereby rendering the messy chase obsolete and attendant stories extinct.

My Grandma Mauck and her siblings would fight to the verbal death about who was born when. With them, it was all about the chase. If they’d had Smartphones to consult, our Thanksgivings might have been quieter, but I wouldn’t have learned about their internecine wars and I’d have been deluded into thinking all my relatives were rational.

My Grandma O’Hern would celebrate summer, no matter how icky hot, with a mountain of pierogi; family and chairs would appear magically and morph into a small city around the table. If they’d had iPads, would I have heard the accounts of how Baby Edna had to walk because Grandpa’s hootch rode in the baby carriage?

How can I hope to develop any story-telling abilities at this point in my life when people are nose-dived into their gadgets, and mind only the catch?

It is arguable that if I don’t know how to tell a story by now I never will. I guess I am stuck in my own messy chase, trying to catch the skill of story-telling, dodging the thumbs of the world.

Recently I posted a photo of a blissful Jack Russell (one Lulu by name) with her slimy ball. The question posed was this: which is more fun, the chase or the catch? Chasing and catching had been on my mind.

It used to be that when someone asked a question in a group the others would offer answers based on what they knew (or thought they knew). A hodgepodge formed and grew: bits of memory, stories, irrelevancies, maybe even an argument or a snippet of song. Various voices could be heard.

A lively chase would have been run.

Now the response to a question in a group is silence. Eyes are down, thumbs fly. In half a trice there’s an answer. The catch is caught. Quick, straightforward, efficient. Also sterile.

I think this is not merely the grumping of an old curmudgeon; I think this is the plaintive cry of the writer. What is lost if memory isn’t tapped, stories aren’t told, if no one is wrong, when the path goes straight to the answer, no detours and no curves and no dead ends?

I accord technology the wonder due it, but I’m uncertain about what happens when we don’t dive into our own personal data banks and goofy lives to try to find answers. I’ve been dismayed at how often people dive into their clouds instead.

I grant there’s a place in life for efficiency.  Sometimes the best way is the fast way. But I think the writer in me wants the chase and feels rebuffed in some way by the mere catch.

There’s another part to this. Another post, another day.

who done the deed?

When I glimpsed the bright sneak

I recanted my whine

my old friends have found me!

the garden’s more mine.

Please pardon the slight haze, dear reader. I had to nab this shot through the window.

When your plumbing’s contrary

your car’s in the shop

the travails of the world

are over the top

and a half-inch behind

words and your keys

the outlook is dour,

and go watch a flower.

I do realize that not all life’s problems are so easily airbrushed, and not everyone has a flower to watch, and I wish it were otherwise. But the other day this happened to me. I was utterly out of patience and stormed out to the back, and there was this gorgeous, tranquil little being, totally absorbed in the zinnias. Imagine being hit so hard by calm. 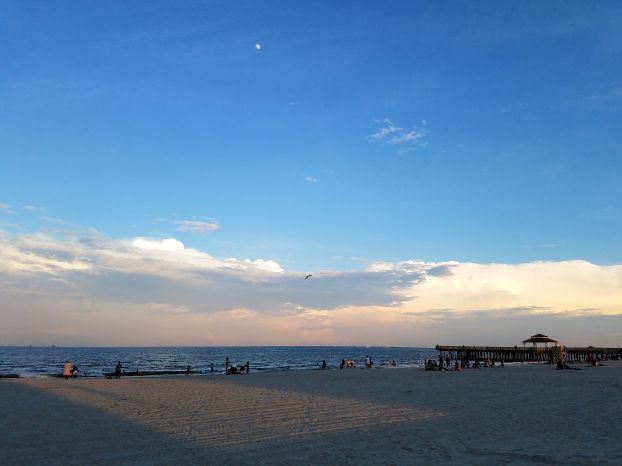 The day closes in layers —

inscribed by sandal and toe —

next water, rocking itself

on edge of dream —

atop, where wisps of day

Thanks yet again to photographer S.W. Berg. 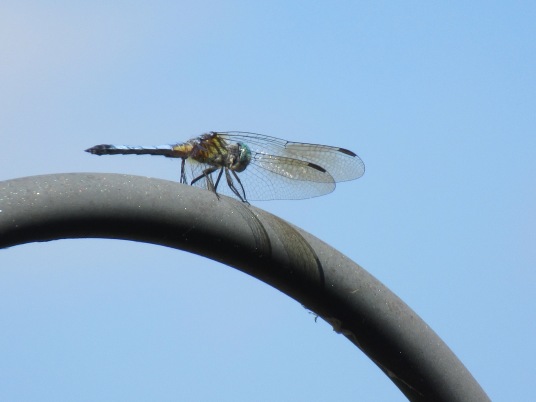 so delicate a shadow,