January 1983 was a low point in my life. I turned 40 and was starting over. I took a deep breath, went back to grad school, got an assistantship, and was assigned a cubicle.

My cubicle mate had different hours and we started leaving notes for each other. Give an English major a scrap of lined paper and stand back. Thus began our friendship.

A few years later, she developed a brain tumor which was initially misdiagnosed. It was a terrible fight she fought, but she survived. Not only that, but she earned her PhD at the same time.

That was Sandy. Sandra Littleton Uetz.

Almost thirty years later came the second tumor. She fought again but this time it was different.

I have lost a dear friend.

I don’t think I’m the only one who wonders.  When, at some low point in life, we find ourselves sharing a desk with a stranger who becomes a dear friend, what is that? Do we call it the grace of God, the luck of the Irish, random chance, some cosmic plan, serendipity?

And when the dear friend is at her low point, and we can’t do anything, what do we call it?

She had great teaching ideas, baked a mean cherry pie, was seriously conversant with Pogo and Krazy Kat and Mark Twain, collected buttons and handkerchiefs, loved books, the St. Louis Cardinals, cats, little dogs, birds, and, most deeply, her family. She was a woman of faith and fear — to live with the possibility of recurring tumors is to be just that.

One December Sandy and I drove to Valparaiso, where the square around the old courthouse had been developed into little shops. Christmas carols — REAL Christmas carols — were piped outside. We wallowed in happy nostalgia. It was one of our best hobnobbings. I promise to remember it.

One of her favorite poems, and perhaps her most favorite, is this, by Robert Frost:

Nature’s first green is gold,
Her hardest hue to hold.
Her early leaf’s a flower;
But only so an hour.
Then leaf subsides to leaf.
So Eden sank to grief,
So dawn goes down to day.
Nothing gold can stay.

May the angels lead you, Sandy. 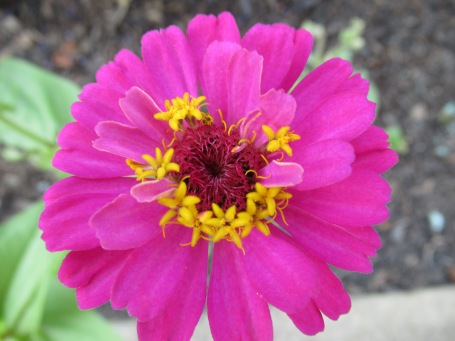 Does one zinnia a summer make?

This is my one and only zinnia flower. The seedlings that lived with me in the kitchen months ago, transplanted into the garden where they would be the yippee colors of summer, were almost all destroyed by the rabbits. Except for a few which I triaged into pots and then transplanted yet again, desperate for them to make a showing. 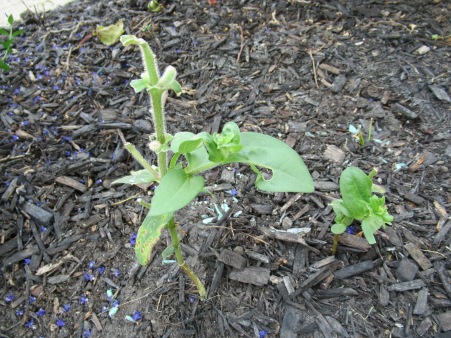 I plant tomatoes to remember Grandpa Mauck, moss roses to remember Grandma O’Hern, and marigolds to remember Dad. Mom is in the whole garden. So, as all gardeners know, the garden is not just expensive, it’s personal. The rabbits tried to take it all from me, and right now on this planet every loss is part of a huge rolling snowball of loss — and helplessness.

If there’s anything I hate, it’s feeling helpless. Life demands at times that we resign ourselves to it, but I can get pretty mad about that. I have lived to wage war this summer. I have potted and repotted and have fought the good fight with Irish Spring soap, rubbing it on flowerpots and shaving it around plants. And I have installed rose canes, which do seem to have some persuasive powers. 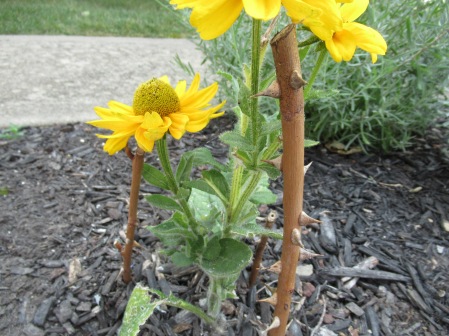 I have ultimately saved a small garden corner where my one surviving clump of gaura now thrives, the rabbit-scorned geraniums blaze away, and, in sheer defiance, some marigolds and salvia, once tattered, bloom insanely. Several of those triaged potted things have made a brilliant, if root-bound, showing.

I salute Farmer McGregor, the Grand Pooh-Bah of Rabbit Rage. I aspire to his greatness. 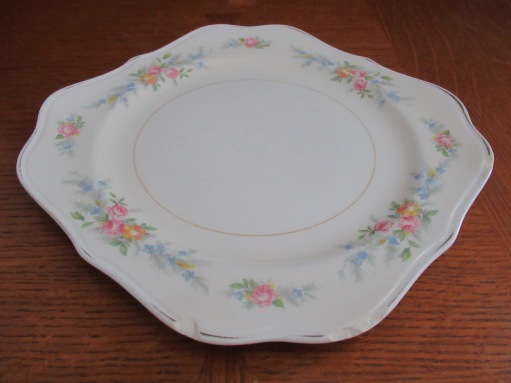 A chip used to be

is its own lore. 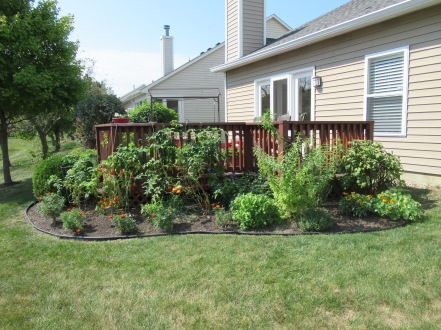 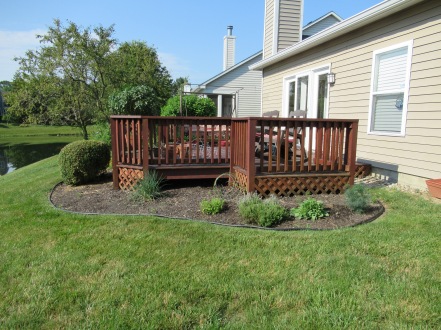 Yesterday I read a blog that asked if the reader has any gardening disappointments this year. Is he kidding? “Gardening” and “disappointment” go together like echinacea and Japanese beetles.

This is my third gardening season here; if you are a gardener, you know the third season is the beginning of seeing the garden as your own. For me, two distinct garden worlds: a bit shady in the front, a lot sunny in the back. Yes, Indiana clay and nasty root systems, exuberant invasives, malicious rabbits and chipmunks. But gradually mine.

Problems with a contractor have made it impossible for me to plant anything in the back this summer. All I have is a struggling collection of gangly seedlings with no place to grow. Empty tomato cages. No frilly yellow blossoms morphing into reds and golds. Not merely disappointment: it’s loss.

Gardeners survive the winter because they know a garden is coming, so when the garden fizzles the gardener kind of fizzles too. She might even let slip an imprecation. Maybe two.

Not everyone is a gardener, of course, but everyone has disappointments. And losses. It seems to me they are all felt more deeply this year because isolation is fertile ground for deep feelings.

So we cope, best we can, with emptiness where there should be life, and watch disappointment become loss, but we should never underestimate the toll it’s taking on us.

Thus far, dear reader, I have coped by writing and by baking, two time-tested strategies for me. They aren’t working any more. A few days ago, we were bloodied once again through the reports of a terror attack on new babies and new mothers. That was one too many for me, awash as we are in grief and fear.

I’ve been sick, as some of you know. Nothing serious, just enough to keep me from being complacent. I don’t know that I had COVID; we still don’t know if my “presumed positive” son had it. We still don’t know much about COVID. “Don’t know” is the only wisdom we have.

Having seen my family only from a distance, unable to touch them, for two months, I think I have a sliver of understanding of what it might mean to die among strangers in Intensive Care.

I am disgusted and exhausted by the flim-flam.

I’m going to step away from the blog for a few days. Each of us has to find ways to stay human in this very dehumanizing time. I am looking for my ways.

Thanks for being with me in my blog. I worry about all of you and hope you endure.

I’ve been in California. Did I have fun? Was it a good time? Well, it’s complicated.

Both my sons, my daughter-in-law, and my grandchildren stood with me at my brother’s grave near a sun-crazed bloom of osteospermum. It was a beautiful day. As I walked away from the grave, I impulsively turned and said, “Bye, LB.” (He was LB and I was BS.) I felt awful. (Full disclosure: my brother and I spent our childhoods trying to kill each other. I do not wish to give the impression of lifetime sibling bliss.) 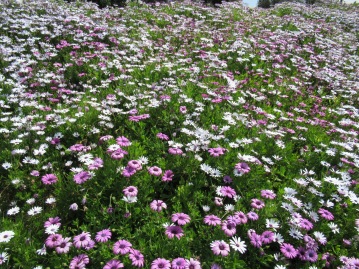 Then to his house so I could see it one last time. To our astonishment, the insides were being ripped out; it seemed the new owner had been granted permission to start renovations before closing was official. I think we scared the daylights out of her, a bunch of strangers led by my 6’5″ second-born. But then came explanations and introductions and a heady dose of her infectious excitement. Lots of hugs.

She invited us to go through, but I declined. I didn’t resent the changes but I wanted to remember his home in all its beigeness the way it had been. Everyone else explored the gutted insides. I visited his stalwart rose, that would live, no matter what he didn’t do.

The new owner commented on the sense of peace she felt in the place. The grave was still with me, but now also a happy sense of renewal. Complicated. 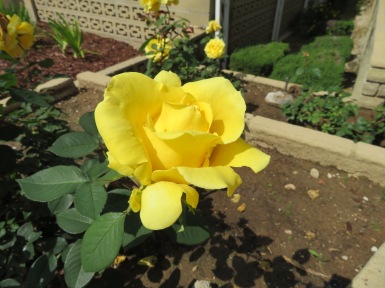 Then legal and financial complications. All confusing to me, but, fortunately, not to my younger son. I leaned on him heavily. And on my new cane. I did not feel young! In the midst of it all, he took me to two art museums. My brain, entangled in the mesh of practicalities, struggled valiantly to adjust to the abstract and erudite. Complicated. 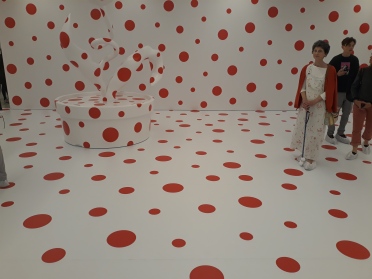 LA traffic was worse than ever. I’ve never been a city person, and the way of the city is but dirty mayhem and claustrophobia to me. It wears me down and depresses me. I felt mechanized.

My son’s friends invited me to dinner. A group of 40-somethings on a rooftop in the hills overlooking Los Angeles with — yes! — Emmy! I got to meet Emmy! I could see that the future is in good hands — and what wonderful calm amid the treetops away from the city! 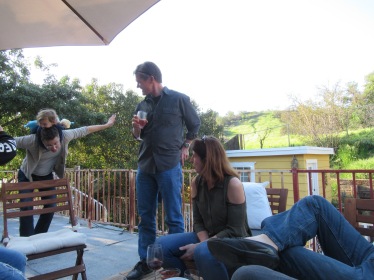 Late in the week, as we sought the Santa Monica Post Office, I spied the Pig Jig. It hit my funnybone in a most unexpected way. As a usual thing, I am not particularly drawn to pigs, let alone when they’re dancing, but these three seemed to insist that they had a place in my week. 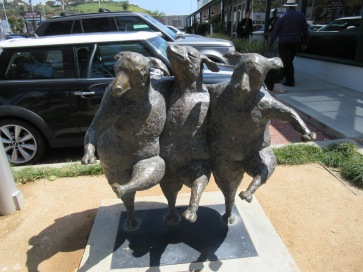 Life goes on? No, I don’t think so. We search for words to band-aid the loss, but the loss remains. Each of us feels it and fears it in his or her own way. It’s human. And there’s nothing more complicated than being human.

Our homecoming was marked by a bracing faceful of snowy air. Ah, spring in Indiana! What a finale!

If you have read to this last, dear reader, you have my thanks. This is by far the longest post I’ve ever written. In part, I wanted to explain my absence. But, as you well understand, I also turn to words to help me.

With thanks to photographer Patrick Mesterharm for the photo of me in the Kusama sculpture at the Marciano.

And thanks also to photographer Kelley Wilson Mesterharm for the official photo of the stalwart rose. 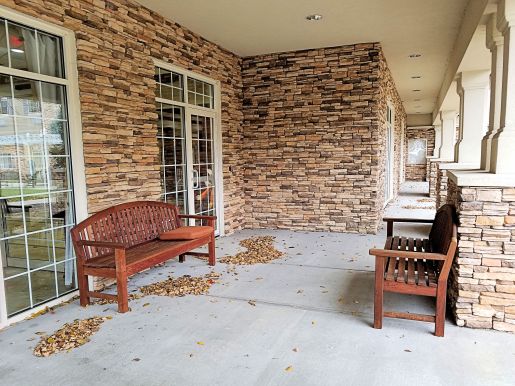 will the stones remember

of blood and bone,

Or does meaning lie too

in the dry brown

awaiting its ride on the scattering wind

leaving the stones to their empty cold?

Thanks more to photographer S.W. Berg. 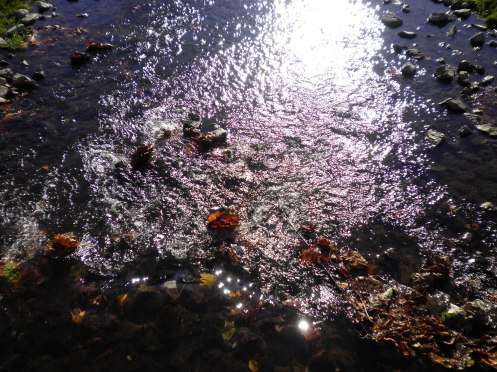 If I tell you tomorrow

the sun will surely shine

that makes the loss all yours

and not one iota mine.

or my words serve only me

my brilliant advice, my platitudes

If I can’t feel with you

your grief and your confusion

the light is mere mirage

a cruel and cold illusion.